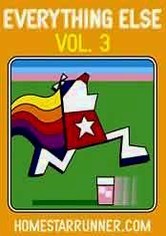 2007 NR 2h 0m DVD
Mike and Matt Chapman present a third collection of offbeat cartoons from their popular Homestarrunner Internet series of hilarious animations. Shorts include episodes of "Teen Girl Squad" and "Marzipan's Answering Machine," along with holiday cartoons. An animated version of the book The Homestarrunner Enters the Strongest Man in the World Contest is also featured, as well as "Where's the Cheat," an interactive game.