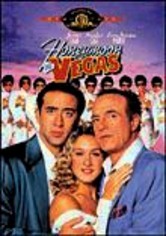 Parents need to know that Honeymoon in Vegas is a '90s comedy that relies on outrageous situations, dimwitted characters who make foolish decisions, and a traditional romantic-story device (boy loves girl, boy loses girl, and, the climactic dilemma -- will boy get girl back?). Set in an extravagant Las Vegas invaded by Elvis Presley impersonators, the movie is a sexual farce without actual sex. Though there's plenty of innuendo, women in sexy clothes, and a plot that has its hero lending his beloved to a shady gambler for a weekend, there's no sexual activity other than a few bedroom scenes with cuddling and kisses between loving partners whose bare backs and shoulders are visible. Occasional obscenities throughout ("whore," "bastard," "screw," "piss," "bastard," "set of balls," "s--t"); drinking and smoking occur in numerous scenes without any drunken behavior. Cameo performances by popular celebrities and actors and a full Elvis Presley score sung by musical stars of 1992 are highlights. Lowlights include the "woman as chattel" mindset and the overall teasing emphasis on women as sexual objects.

Scenes show lovers in bed, before and after sex, with no actual sexual activity other than kissing and cuddling with bare backs and shoulders in view. Hero imagines his sweetheart being grabbed, touched, and groped by a rival. References to cheating. A man makes a comical reference to dreaming about his mother being naked. Lots of revealing, skimpy, very low-cut clothing, including swimwear and chorus-line costumes.

Two men scuffle. Sparring partners box in a ring. A man briefly holds onto a woman against her will and threateningly gives her orders.

True love will conquer all.