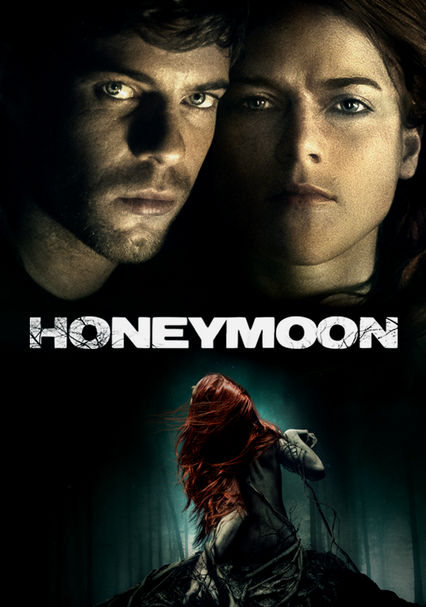 2014 R 1h 27m Blu-ray / DVD
Soon after arriving at a secluded woodland cabin, a honeymooning couple sees their bliss evaporate when a sleepwalking incident leads to increasingly odd behavior by the bride -- and mounting paranoia on the part of her groom.

Parents need to know that Honeymoon is a low-budget horror film that has a long, slow buildup before anything gruesome or gory is shown, but it does end up having a fair bit blood and disturbing imagery (a woman stabs herself in the crotch area). The main characters -- a pair of newlyweds on their honeymoon -- have sex on several occasions; one takes place in the shower, and a side view of the naked characters, pressed together, is shown. Language is fairly strong, with multiple uses of "f--k."

A newlywed couple has sex several times, though nothing sensitive is shown. In a shower scene, the side of the woman's breast is visible. Her bottom is also visible in a night scene. She's also shown in a bra and panties. Oral sex is implied.

The movie mostly conjures up a sense of dread, but there's some gruesome violence toward the end. A woman stabs herself in the crotch, and blood is shown. A man removes a long, strange creature from her vagina. A man ties up a woman. They fight, and some bloody injuries are shown. A man throws a tantrum in a restaurant and smashes some lamps.

This is horror at its most basic: bad things happening to good people. They react with fear and concern, but no real lessons are learned, and characters don't go above and beyond at any time.