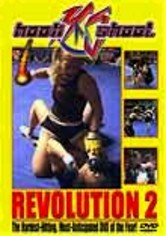 2004 NR 1h 40m DVD
Two years after the first women's mixed martial arts competition shook the world of sports, the ladies are back -- and they're leaner, meaner and tougher than ever in the nine hard-hitting bouts featured in this exciting program. Judy Neff, Jessica Ross, Terry Blair, Tara LaRosa, Francesca Menda and a host of others battle it out in the ring and then pour their hearts out for the cameras in interviews and behind-the-scenes footage.