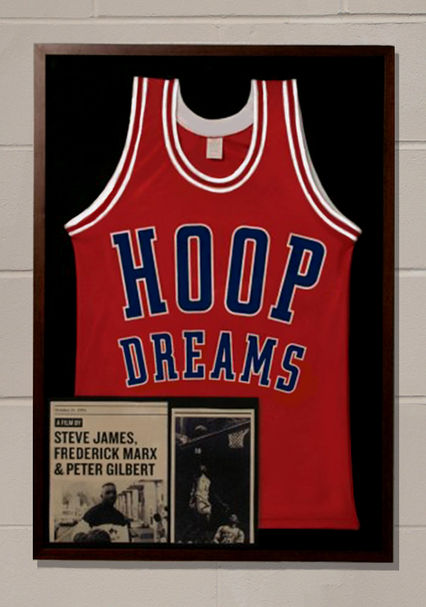 1994 PG-13 2h 51m Blu-ray / DVD
Two ordinary inner-city Chicago kids dare to reach for the impossible professional basketball glory in this epic chronicle of hope and faith. Filmed over a five-year period, Hoop Dreams, by Steve James, Frederick Marx, and Peter Gilbert follows young Arthur Agee and William Gates as they navigate the complex, competitive world of scholastic athletics while dealing with the intense pressures of their home lives and neighborhoods.

Parents need to know that this three-hour-long documentary film features a lot of intense discussion by two young men about their experiences with parental separation and divorce, familial drug use, extreme poverty, sport-related injury, urban blight and violence, and teen pregnancy, all while they're trying to earn college basketball scholarships. There's some locker-room profanity and some strong language from basketball coaches, such as "bulls--t," and a scene where one of the characters is listening to music with particularly strong lyrics.

William fathers a child before he graduates from high school. Teen sexuality is discussed in terms of its consequences.

A character describes being mugged, and the danger of living in the ghetto is a theme throughout. Knee surgery is shown. The usual scuffles on a basketball court during a game are shown.

Locker-room profanity. Some strong language from basketball coaches, such as "bulls--t," and a scene where one of the characters is listening to music with particularly strong lyrics.

Poverty can crush the spirit, but family can help support people through difficult times. Hard work and listening to experts and coaches don't always get you what you want. Life is not fair. Talent does not always rise to the top. Sometimes bad luck ruins everything. Drug use is destructive.

The process of scouting and recruiting talented young basketball players, from as early as age 12, is depicted in terms of economic advantage -- most especially to the high schools and colleges that recruit and give scholarships and secondarily to the striving players who dream of wealth, fame, glory, and a route out of the ghetto. Brand-name sports shoes and athletic gear are seen as overpriced and desired by those who can't afford it.

Drug use by family members and friends is discussed, always in terms of its consequences. Drug-dealing neighborhoods are shown. Bo is a crack cocaine addict who eventually gets clean.