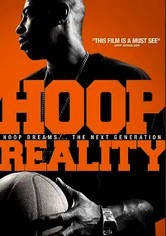 2007 NR 1h 30m DVD
William Gates and Arthur Agee's lives are examined once again in this follow-up documentary made 10 years after the success of Hoop Dreams, which chronicled their aspirations to escape Chicago's projects and play in the NBA. Agee, who now makes public appearances, helms a radio show and a life skills foundation, and Gates, who is now a pastor, have new ideas to share in filmmaker Lee Davis's insightful film.