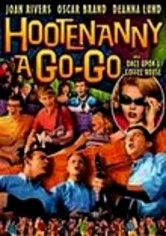 1965 NR 1h 19m DVD
When a wealthy (but straitlaced) playboy from Manhattan falls for a café folk singer, he'll go to any lengths to get her -- including buying the Miami coffeehouse where she works. Beatniks and bongos abound in this musical that features Joan Rivers in her first film appearance (as part of the comic team Jim, Jake and Joan), as well as performances by the Goldebriars, the Free Wheelers and Oscar Brand.