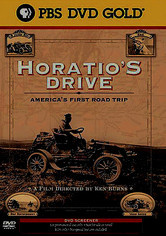 2003 NR 2h 27m DVD
Ken Burns's documentary celebrates the 100th anniversary of the first transcontinental road trip, one undertaken for the flimsiest of reasons: a $50 wager. In 1903, Dr. Horatio Nelson Jackson started up his Winton in San Francisco; sixty-three days later, he arrived in New York City. Burns captures Jackson's pioneering spirit using photos, letters and footage from a road trip he and his crew take to retrace Jackson's journey.