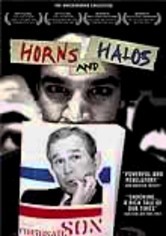 2002 NR 1h 19m DVD
Suki Hawley and Michael Galinsky's documentary charts the troubled waters that the tell-all book Horns and Halos traversed to finally be able to see the light of day. Written by J.H. Hatfield, the tome purported to take an unflinching look at the past of President George W. Bush (including his fling with cocaine), but spooked publishers canceled its publication under pressure. It was eventually released in 2001, amid much controversy.