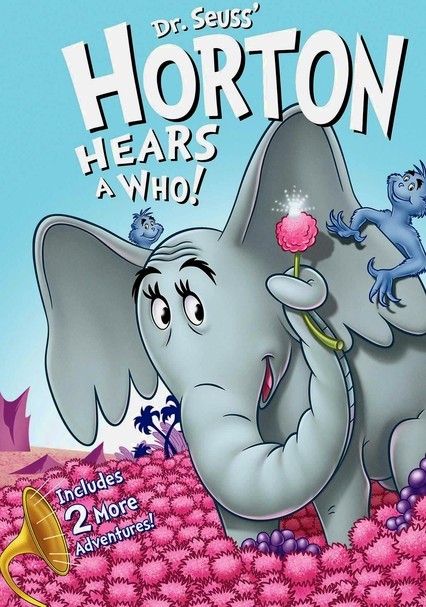 1970 NR 0h 26m DVD
Dr Seuss's beloved story about an elephant that discovers a tiny society existing on a spot of dust springs to life in this vibrant animated adaptation from Academy Award-winning animator Chuck Jones. Agreeing to protect Who-ville from harm, Horton the elephant inspires the Whos to make their presence known among all the inhabitants of the jungle and champion the idea that "a person is a person, no matter how small."

Parents need to know that kids will see some cartoonish violence. Most notably, some characters cage Horton and almost throw the dust-speck world he discovers in a cauldron of boiling water. There are three more stories on the 2008 DVD: The Butter Battle Book (1989), Daisy-Head Mayzie (1995), and Horton Hatches the Egg. These three tales range in tone from light-hearted to heavy. Horton Hatches the Egg is the most kid-friendly, though it unfortunately ends with a throwaway gag where a fish shoots himself in the head. Preschoolers should enjoy the simplicity of the stories and the Seussian wordplay, although the dark messages, such as mutual destruction (The Butter Battle Book), and loneliness (Daisy-Headed Mayzie), will fly over their heads.

Very little and of the cartoonish variety -- Wickersham brothers threaten to boil the dust speck and cage Horton. In a throwaway gag in Horton Hatches the Egg, a Peter Lorre look-alike fish fatally shoots himself in the head. Two lands are on the verge of disaster in the inconclusive finale of The Butter Battle Book.

Birds are portrayed as gossiping and lazy. Possitive lessons about how much even the smallest voice and smallest person matters, and dedication to protect living things and fulfill promises.