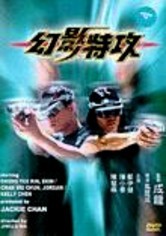 1998 NR 1h 33m DVD
CIA scientists Tango (Ekin Cheng), Blue (Kelly Chen) and C.S. (Jordan Chan) must battle an international terrorist in this thriller. The three agents are developing a virtual-reality project to transform everyday people into ultimate combatants. Their work is interrupted by evil terrorist Alien (Terence Yin), who kills C.S.'s fiancée and kidnaps Blue. Agents Tango and C.S. face many unforeseen dangers as they embark on a mission to save Blue.