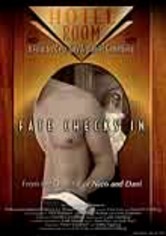 1998 UR 1h 26m DVD
A single sleazy New York hotel room is the setting for five separate stories. The collection of characters includes a magician who spends the night with a prostitute and later finds out that she's his daughter, two newlyweds involved in a fight that gets ugly and a cross-dressing television star who chooses to end his life. Cesc Gay and Daniel Gimelberg direct.