House / A House in Jerusalem 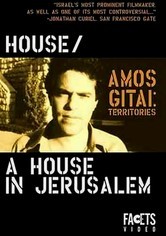 House / A House in Jerusalem

1980 NR 2h 28m DVD
A single house in Jerusalem becomes a microcosm of Israeli-Palestinian relations in this absorbing pair of documentaries from acclaimed director Amos Gitai. In the first film, originally censored by Israeli TV, a European-Israeli professor buys a house that was deserted by a Palestinian doctor in 1948. The second film returns to the house nearly 20 years later to examine the changes in the residents and in the neighborhood.