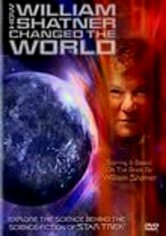 2006 NR 1h 30m DVD
William Shatner -- aka Capt. James T. Kirk from TV's "Star Trek" -- has never been shy about tooting his own horn, so it comes as no surprise that he claims his show gave rise to everything from the Internet to cell phones in this lighthearted Emmy-nominated presentation produced for The History Channel. Based on Shatner's book &NFiI'm Working on That&NFi_;, the program features interviews with inventors inspired by the show's futuristic vision.