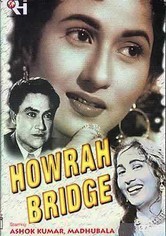 1958 NR 2h 0m DVD
Upon hearing that his older brother was murdered, Rakesh (Ashok Kumar) rushes to Calcutta to track down the killer and recover a priceless family heirloom -- an exotic statue of a Chinese dragon. During his search, he crosses paths with a notorious crime lord, a Chinese innkeeper, a café manager and, of course, a tempting beauty. Shakti Samanta directs this black-and-white Hindi-language drama with music by O.P. Nayyar.