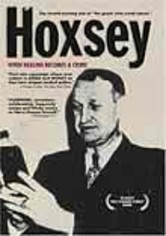 1987 NR 1h 23m DVD
In the 1920s, former coal miner Harry Hoxsey claimed to have an herbal cure for cancer. Although scoffed at and ultimately banned by the medical establishment, by the 1950s, Hoxsey's formula had been used to treat thousands of patients, who testified to its efficacy. Was Hoxsey's recipe the work of a snake-oil charlatan or a legitimate treatment? Ken Ausubel directs this keen look into the forces that shape the policies of organized medicine.