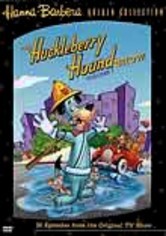 1958 NR 5 discs
From famed creators William Hanna and Joseph Barbera comes this classic cartoon hit, a show popular with children yet droll enough to appeal to adults -- and the first animated series to win an Emmy Award. In this collection of episodes, the deadpan dog with a Southern drawl shares the stage with Yogi Bear, wily mice Pixie and Dixie and nemesis cat Mr. Jinks, a combination that paved the way for memorable future Hanna-Barbera characters.

Parents need to know that this classic 1950s Hanna-Barbera cartoon is chock full of the cartoon violence, stereotypical humor, and misogyny that were typical of the era -- which you probably don't really remember from when you watched it as a kid.

Guns are everywhere; every cigar explodes; fist fights (in the form of rolling clouds of dust and little stars) are common.

Characters use one another, shoot one another, drop one other from extreme heights. Deceit and trickery are often rewarded. It's all funny, but it doesn't necessarily mean it's a good example.