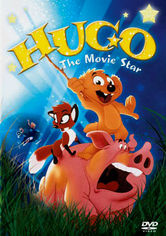 2005 NR 1h 8m DVD
He's got a heart made of gold, and he's one of a kind ... he's Hugo, the rarest and most adorable animal in the jungle. Filled with entertaining songs and plenty of laughs, this animated kids' adventure begins when Hugo is kidnapped from his jungle home by humans and taken to Hollywood, where he's forced to perform in a movie. Just as fame is starting to go to Hugo's head, his fox friend Rita comes to the rescue.