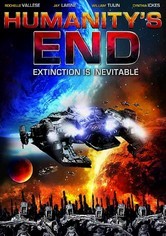 2009 NR 1h 24m DVD
When a distant race called the Nephilim makes it their task to erase humanity from the face of the galaxy, it's up to one man and one woman on a remote planet to avoid death and give humankind a fresh start. But the task isn't easy with the ultraviolent Nephilim and another hybrid race known as the Konstrukts bent on destroying them. Neil Johnson directs this sci-fi thriller that stars Jay Laisne, Peta Johnson and Rochelle Vallese.