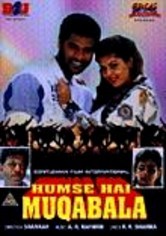 2000 NR DVD
It's love at first sight when student leader Prabhu (Prabhu Deva) meets Shruti (Nagma), the daughter of villainous state governor Ranjit Singh. Unfortunately, Ranjit disapproves of the relationship, and he works hard to keep the lovebirds apart. Prabhu and Shruti, however, manage to stay together, foiling some of Ranjit's illegal plans in the process. Girish Karnad and S.P. Balasubramanyam also star in this drama directed by Shankar.