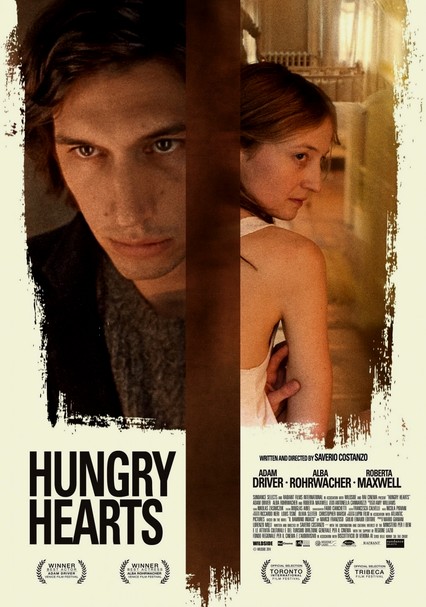 2015 NR 1h 53m DVD
When Mina and Jude get stuck in the bathroom of a New York City restaurant, romance, marriage and a child soon follow. But before long, the couple finds themselves clashing over the care of their infant, who's not developing.

Parents need to know that Hungry Hearts is an engrossing, nerve-wracking drama that focuses on the intense bond between a mother and her new baby. It shows what can happen when that connection is somewhat off kilter. There's brief nudity (breasts, woman's bottom) and some swearing (including "s--t" and "f--k"), as well as a little social drinking and some intense arguments -- including moments when a man strikes his wife. Parts of the film feature an infant in distress, which can be tough to watch, especially for parents.

Two brief sex scenes show a couple moving vigorously, with a quick glimpse of a bare breast. A woman is shown in a hospital gown that reveals her bottom; she's later seen bathing, her breasts visible.

Arguing, with loud yelling. A man strikes his wife.

Jude and Mina clearly love each other and their baby son. But love alone isn't enough when they have fundamental differences regarding how best to care for him, and it's hard for either of them to compromise.

Adults drink wine at a wedding.