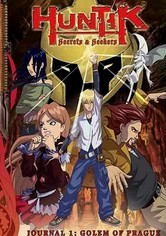 2009 TV-Y7 2 discs
After stumbling upon his dad's private journal, high school kid Lok Lambert finds himself the target of the shadowy Organization. Soon, Lok must become a Seeker in order to conjure up a band of Titans to save the planet. Enlisting the aid of detective Dante Vale, brainy heiress Sophie Casterwill and others, Lok takes on the Organization -- and its mastermind, the Professor -- in the explosive adventures of this animated series. Journal 1 contains episodes 1-7.

Parents need to know that this animated action series follows the adventures of humans who use magical amulets to summon fearsome creatures from another plane. Some of these people work for the shadowy Organization, which wants to use the power of the creatures to further its evil agenda, while another group has vowed to stop them (so it's pretty much your standard good vs. evil divide). There's plenty of action -- including martial arts fights and magical duels between the humans and all-out brawls between the creatures -- though there's little explicit violence and injuries are rare.The series is tied in to an extensive product line, including a trading card game, so kids may start asking for stuff after watching.

Plenty of cartoon action, including martial arts combat and magical duels between humans, as well as some pretty serious brawling by Titans -- which are fearsome creatures from another plane that can be summoned to this world. The Titans look pretty scary, with sharp swords, long fangs, and dangerous claws. Despite all the mayhem, injuries and bloodshed are rare.

There's no commercial content on Huntik, but there's plenty of Huntik merchandise (including a trading card game) available for fans to buy.