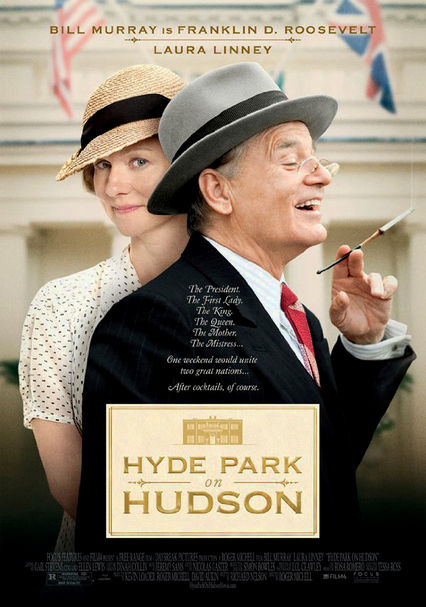 2012 R 1h 34m Blu-ray / DVD
When the king and queen of England visit U.S. President Franklin Roosevelt hoping for support on the eve of World War II, Roosevelt must deal with his official duties as well as the competing interests of his mother, his wife and his mistresses.

Parents need to know that Hyde Park on Hudson is a light period drama focusing on a fateful weekend when President Franklin Delano Roosevelt (Bill Murray) played host to the king and queen of England. Against a rich backdrop of pre-World War II history, an infatuation develops between the president and his distant cousin, Margaret Stuckley (Laura Linney). The movie offers a decidedly intimate portrayal of the president, following him into his bedroom. One fairly sexual scene takes place in a car; nothing graphic is shown, but movements and gestures imply that a woman is using her hand to pleasure a man. A naked woman is also seen in the background of another scene (fuzzily), and there's also some swearing and plenty of period-accurate smoking and drinking.

One scene shows a couple in a car -- it's strongly implied that she's using her hand to pleasure him. Viewers don't see much more than their faces and the backs of their heads, though there's bouncy movement that hints at what's happening. Later, characters discuss one person's rampant infidelity and speculate about another's sexuality. In the background of one scene, a naked woman is seen (fuzzily and from somewhat of a distance).

Men and women of greatness are human, too -- with their own foibles and failings. So perhaps it's best not to lionize them, but to appreciate what they bring to the table without losing sight of their humanity.

Lots of era-accurate smoking. Some characters also drink cocktails to relax, though they bear the brunt of another person's disapproval for doing so.