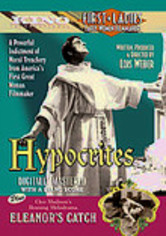 1915 NR 1h 5m DVD
Forward-thinking director Lois Weber spins two controversial morality tales in 1914's Hypocrites and 1916's Eleanor's Catch. In Hypocrites, an art-loving priest is stoned to death for placing a nude statue in the town square; the statue then comes to life whenever one of the townsfolk acts hypocritically. Eleanor's Catch tells of a woman from the slums turning the tables on a neighborhood thug who's taken advantage of her boyfriend's absence.