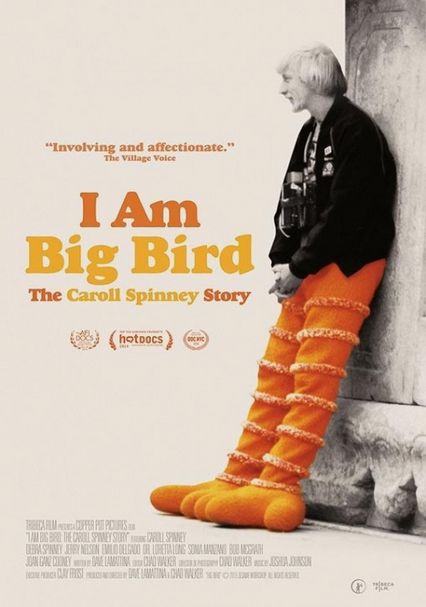 2015 NR 1h 30m DVD
For more than four decades, Caroll Spinney has been the man inside the beloved "Sesame Street" characters Big Bird and Oscar the Grouch. In this affectionate documentary, Spinney shares the highlights of his unique career.

Parents need to know that I Am Big Bird: The Caroll Spinney Story is a documentary about the puppeteer who performs Big Bird and Oscar the Grouch on TV's Sesame Street. While most of the content is OK for tweens and up, it's not appropriate for the littlest Big Bird fans: Spinney talks about his troubled childhood and his abusive father, who beat him up as well as his mother. Images of the Vietnam War are briefly shown, suicide is mentioned, and death is discussed. Spinney uses the word "rape" to describe the feeling he had when some students ruined his Big Bird suit; there's also one use of "f--k" (barely heard but written in subtitles) and a use of "bastards." There's some very mild, brief innuendo. Big Bird toys and products are shown.

Mentions of an abusive childhood, references to father hitting mother and leaving bruises. Mild images of the Vietnam War. Reference to "rape." Death is discussed. Suicide is mentioned.

A single use of "f--king," barely heard, but written in a subtitle. Plus "oh God," and "bastards."

Talks about how people can have two "sides" -- a kind, loving side and a grouchy side (like Big Bird and Oscar the Grouch). Suggests that unconditional love and open-hearted curiosity can be a path to success, but also that hard work and persistence can pay off as well.