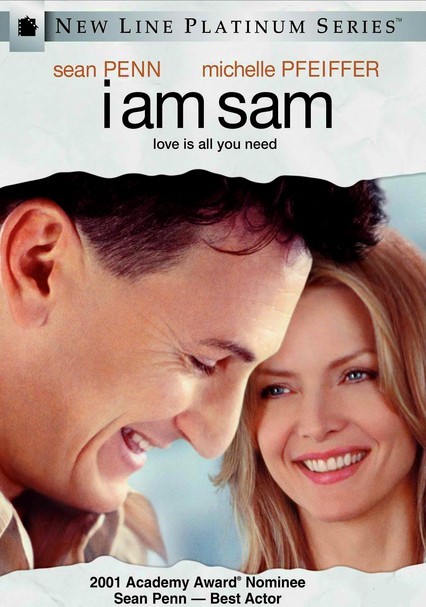 2001 PG-13 2h 14m DVD
After fathering a child with a homeless woman, Sam (Sean Penn) -- a grown man with the mental capacity of a 7-year-old -- raises the baby himself until an incident at a birthday party finds the Child Protective Services deeming him an unfit guardian. With the help of yuppie lawyer Michelle Pfeiffer, Sam attempts to regain custody of his daughter and prove that, despite his handicap, he's a truly loving father.

Parents need to know that I Am Sam portrays a mentally challenged man and his impassioned efforts to parent and retain custody of his precocious young daughter. There are several heartwrenching scenes during which Sam and Lucy are forcibly taken from one another. Other characters (two of whom are actually developmentally disabled) give insightful performances that may enlighten older kids and teens about people with special needs. A female character swears occasionally: one use of "f--k," along with numerous instances of "goddammit," "hell," and other mild epithets. Starbucks is prominently featured as Sam's workplace, and many other products and retailers are identified.

Sam, the film's hero, is referred to as "retarded" in some scenes. One leading female character swears several times: "goddammit," "hell," "for Christ's sake," "son of a bitch," "up the wazoo," "screw." There is one use of "f--k."

Provides a very sympathetic look at the developmentally disabled community and shows elements of both their limitations and strengths. Promotes love, commitment, and good intentions as primary values in parenting and at the same time affirms that "it takes a village to raise a child."