I Am an Animal: The Story of Ingrid Newkirk and PETA 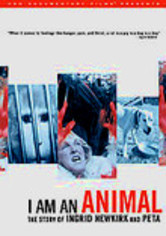 I Am an Animal: The Story of Ingrid Newkirk and PETA

2007 NR 1h 12m DVD
Founder of the world's largest animal rights organization, People for the Ethical Treatment of Animals president Ingrid Newkirk has dedicated her life to the liberation of animals and inspired scores of followers. This documentary from HBO features interviews with PETA supporters -- and detractors -- to offer a rare glimpse behind the scenes of the controversial organization and the woman who has become the figurehead for a worldwide movement.