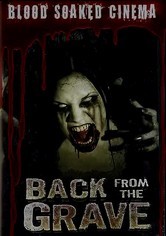 1964 NR 2h 27m DVD
Mad scientists and undertakers with a flair for gourmet meals headline this horror double feature. In Back from the Grave, starring William Joyce, a writer uncovers a madman's secret zombie factory. And small-town citizens unwittingly dine on their friends and family in The Undertaker and His Pals, which centers on a creative undertaker who spices up his corpse-clientele and gives the meat to the owner of the local diner. Ray Dennis stars.