I Killed That Man 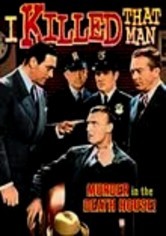 I Killed That Man

1941 NR 1h 11m DVD
While awaiting execution, a jailed killer drops dead from a poison dart just as he's about to reveal the name of the person who paid him to commit the crime for which he's been convicted. Now, it's up to the assistant DA (Ricardo Cortez, who played Sam Spade in 1931's Maltese Falcon) and his reporter girlfriend (Joan Woodbury) to solve the murder in this death house whodunit from director Phil Rosen.