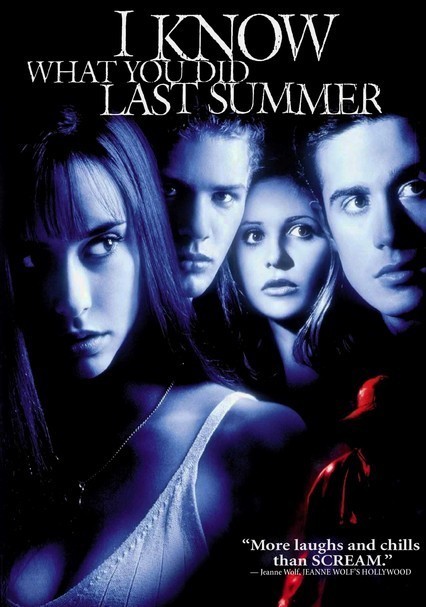 1997 R 1h 41m DVD
When some drunken teenagers flatten a stranger with their car, they leave him for dead and vow never to talk about the incident. But a year later, the victim returns to exact revenge in this slasher flick.

Parents need to know that I Know What You Did Last Summer is a 1997 horror movie about four teens who attempt to hide the evidence of a drunken hit-and-run they perpetrated only to find that the man they thought they killed seems to be alive and all-to-eager for revenge. There is frequent horror movie violence and gore--characters are shown up-close getting stabbed to death in the throat, chest, and back with a giant hook. Early in the movie, a young man who is later discovered to have committed suicide is shown sitting on the edge of a cliff while drinking from an unmarked bottle of alcohol. The four lead characters in the movie--teenagers--are shown drinking heavily while on the beach; one character in particular drinks from a large bottle of whiskey and behaves in an extremely intoxicated fashion, resulting in a car crash and apparent hit-and-run that sets the story in motion. There is also some bullying--verbal and physical.

Some sexual innuendo, especially at the beginning.

Early in the movie, a man is struck by a car and seemingly dead; his bloodied and lifeless boy is tossed into a bay. A man murders several characters by stabbing them in the chest, throat, or back with a giant hook. Lots of blood, dead bodies. A hand is severed from an arm as it grinds through a pulley. A fist fight. Some physical and verbal bullying.

Frequent profanity, including the m-f and f-word. "A--hole." "S--t." "Prick." A male character makes sexually suggestive remarks about his girlfriend while she's taking part in a beauty pagaent.

Character drinks from a Diet Coke can.

Early in the movie, a young man sits on the edge of a cliff drinking from an unmarked bottle of alcohol. Teens smoke cigarettes and drink to excess while on the beach. On the drive home from the beach, one of the four teens continues drinking heavily from a bottle of whiskey and behaves in an extremely intoxicated manner; his actions precipitate the driver of the vehicle hitting and seemingly killing a man who was crossing the road.