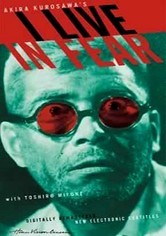 1955 NR 1h 43m DVD
Haunted by the threat of nuclear war, aging foundry owner Kiichi Nakajima (Toshirô Mifune) is ready to move his family to South America's comparative safety at any cost, but problems arise when his wife and children refuse to pull up stakes. Nakajima's adult offspring goes so far as to file a court petition to have him declared incompetent, leaving a sympathetic court counselor (Takashi Shimura) as Nakajima's only ally in this compelling drama.