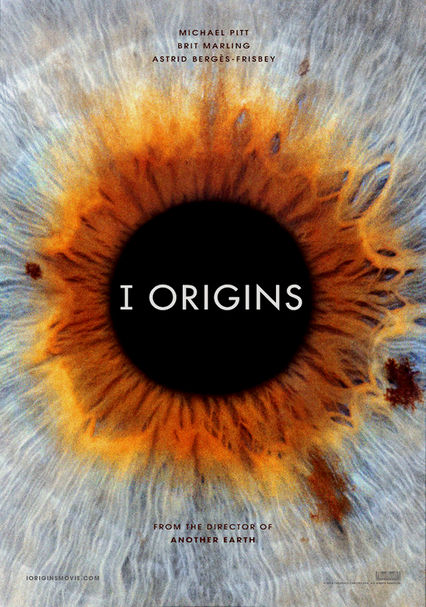 2014 NR 1h 47m Blu-ray / DVD
On the brink of a profound discovery, a molecular biologist has a chance encounter with a young woman who is the only one who can prove his theory. Their connection ends up transforming both their lives, as well as the direction of his research.

Parents need to know that I Origins is a science-fiction romance that raises some fairly heady spiritual, supernatural, and metaphysical ideas, though it does so in a simple, heartfelt way. A character dies in a fairly gruesome way, and some blood is shown, though much of the gore is kept off screen. Formaldehyde is accidentally splashed in a character's eyes, and characters get angry and throw fits. Couples kiss and have sex, and there's a brief scene of female toplessness. Language isn't frequent but does include more than one use of "f--k" and "s--t." A main character smokes cigarettes, and characters drink on several occasions. One supporting character is called on his excessive vodka drinking. Some brand names (Mentos candy, Lancome perfume, etc.) are mentioned and become thematic devices.

A woman seduces a man and has sex with him on a toilet; no nudity is shown, and the act is over fairly quickly. Later, they become a couple and are shown kissing and having sex on other occasions. A woman is shown topless. A man masturbates to a video on his computer (the sensitive material is kept below the frame). His girlfriend catches him but asks him not to stop; she wants to know what turns him on. The main character has two partners, but only because the first one passes away.

A character is sliced in half by a broken elevator. Most of this takes place off camera, but blood is shown, and a dead body is shown. A character gets formaldehyde splashed in his eyes. A character gets angry and trashes his apartment, throwing furniture and objects around. A character injects himself with a needle.

This science-fiction story is fascinated by various ideas about eyes containing part of the human soul, and, on the other side, the idea that if eyes evolved throughout creation, then it proves the non-existence of God. Though the movie certainly doesn't prove anything one way or another, it could open up some metaphysical, spiritual, and supernatural discussions.

Adult characters drink alcohol and smoke cigarettes at a party. The main character smokes several cigarettes. Characters are shown drinking at a bar and drinking beer casually. A lab partner drinks a little too much vodka. He's shown drinking, and another character remarks that he "stinks of vodka."