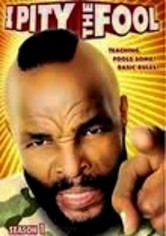 2006 NR 2h 6m DVD
Mr. T takes to the streets to slap some motivation into slackers and give his special brand of advice to anyone who needs it in this reality series from TV Land. He helps a fractured family learn better communication, gives relationship advice to a father and son-in-law who work together, and teaches some unruly sons to respect their mother. Whatever the challenge, Mr. T always sticks to his mantra: "I'm teaching fools some basic rules."

Parents need to know that in this self-improvement reality series, '80s action star Mr. T helps real people who are struggling with family, work, and relationship problems -- many of which are rooted in laziness and failed communication. Parents also need to know that while the show doesn't present these issues in a way that's particularly controversial or extremely contentious, the subject matter isn't really geared toward younger viewers. That said, some kids may be drawn in by Mr. T's icon status, and the show is fine for older tweens and up.

References to punching and other violent acts as they pertain to Mr. T's action-hero personality. But there's no tolerance of violent behavior.

Some of the locations Mr. T visits are commercial businesses, such as a Nissan car dealership.