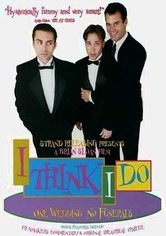 1997 NR 1h 30m DVD
The marriage of mutual friends reunites former college roommates Bob (Alexis Arquette) and Brendan (Christian Maelen), who tried to ignore the sexual tension that always flowed between them. Brendan finally comes out to Bob at the reception, but is it a case of too little, too late? Writer-director Brian Sloan's romantic comedy co-stars Lauren Vélez and Jamie Harrold and features a rare cameo from Marni Nixon.