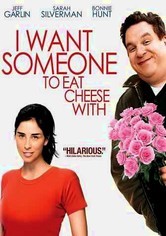 2007 NR 1h 20m DVD
James (Jeff Garlin) knows all too well that the way to a man's heart is through his stomach. An overweight yet starving comedian in Chicago looking for love and weight loss in all the wrong places, James turns to the one thing that won't let him down: food. That's when he meets Beth (Sarah Silverman), who offers to fill James's desire for affection -- and ice cream. Adapted from Garlin's one-man show, the film co-stars Amy Sedaris and Bonnie Hunt.

Parents need to know that although this indie romantic comedy stars the usually foul-mouthed comic Sarah Silverman and Jeff Garlin (a veteran of the caustic Curb Your Enthusiasm), it's actually a good-natured film with lots of heart that's fairly teen-friendly ... with some caveats. Silverman taps into her shtick a bit by acting like a push-the-envelope nympho who likes to discuss sex, albeit in cleaned-up terms (there's virtually no language stronger than "crack whore" in the movie). And there are some painfully convincing moments of binge-eating on Garlin's part.

Some cleavage shots, as well as a scene in which Sarah Silverman's character, who professes to liking sex more than relationships, tries on underwear in a dressing room and beckons to James. She also whips off her shirt once. Detailed description of a sex act called a "hoagie shack." An extended riff on a homeless man's obsessive knowledge of nude scenes in various movies.

Fairly clean. Some use of the words "crack whore," and some scatological phrases.

Beth picks up strange men and later ridicules them. James clearly has an overeating problem and binges onscreen.

Second City comedy troupe is clearly identified; a hotdog stand's logo is visible; some products identified in a corner deli.

Nothing that really raises flags (unless you're a nutritionist keeping track of sugar rushes...).