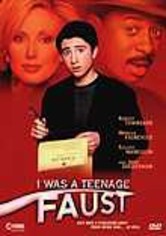 2002 NR 1h 35m DVD
Mr. Five (Robert Townsend) is about to be tossed into the depths of hell unless he can bestow a soul to his boss, Lucifer. Fearful of what will happen to him if he arrives empty-handed, he finds a teenage geek named Brendan Willy (Josh Zuckerman), who agrees to swap his soul to be one of the popular kids. The deal is on until Five realizes that the task of making Brendan cool may be more difficult than he previously thought.