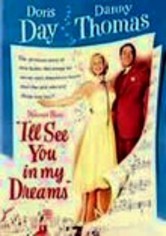 1951 NR 1h 50m DVD
This Golden Globe-nominated musical depicts the life of lyricist Gus Kahn (Danny Thomas) and his devoted wife (Doris Day). Hit songs such as "My Buddy" make Kahn a star in the music industry, but he questions his value when he loses everything in the 1929 stock market crash. Frank Lovejoy, Jim Backus and Patrice Wymore round out the cast of this sentimental biopic from famed director Michael Curtiz.