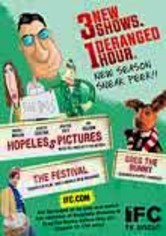 2005 NR 2h 0m DVD
Get a sneak peek at three new original series from IFC: "Hopeless Pictures," an animated comedy from Bob Balaban that follows a self-absorbed indie mogul's struggles to keep his dysfunctional studio afloat; the return of "Greg The Bunny," with deranged puppet duo Greg and Warren the Ape in all-new puppet parodies; and "The Festival," a mockumentary about a naïve director making his film debut at M.U.F.F (Mountain United Film Festival).