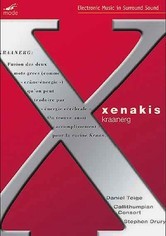 2008 NR 2h 11m DVD
Part documentary and part concert, this program celebrates the work of Iannis Xenakis, a Greek composer who's considered one of the most important modernists of the 20th century, and also includes a performance of his ballet music "Kraanerg." Other highlights include interviews with Xenakis experts Gerard Pape and James Harley, as well as an intimate conversation with the composer's widow, Françoise.