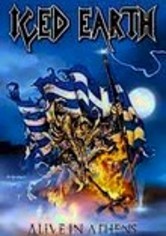 1999 NR 2h 42m DVD
Power metal band Iced Earth is captured in all their Gothic-inspired, guitar-screeching glory in this film of the two 1999 sold-out shows in Athens, Greece, that resulted in the group's "Alive in Athens" album. In addition to the newly discovered footage of the historic concerts, the presentation includes an interview with rhythm guitarist and songwriter Jon Schaffer and backstage clips of the boys.