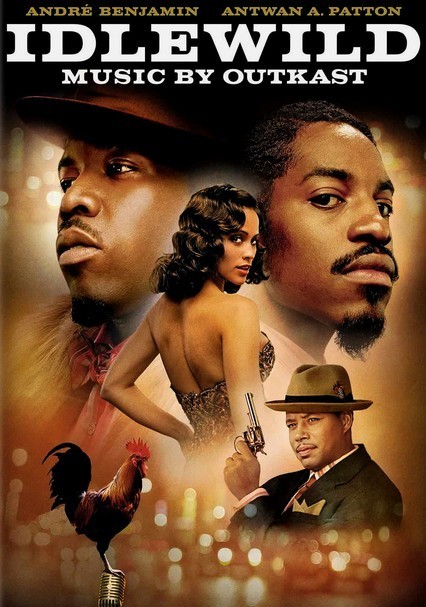 2006 R 2h 1m DVD
Percival, an introverted piano player, and Rooster, the star performer and manager of a Southern speakeasy -- who's as outgoing as Percival is shy -- struggle to keep alive their dream of making it big against long odds during the Prohibition era.

Parents need to know that this film isn't appropriate for kids, who may know OutKast from the hit song "Hey Ya!" It includes stylized and graphic violence, mostly beatings and shootings of male gangsters, with bloody results (a woman is also shot, though she dies more "delicately" and melodramatically). Female stage dancers wear skimpy costumes, showing breasts (painted) and barely-covered derrieres. A mortician works on bodies, one arriving with blood under its head. A character considers suicide by hanging, going so far as to arrange the noose and chair in his house. A couple of sex scenes: one in the back of a car involves cunnilingus (a man is cheating on his wife); a second scene takes place in a bedroom. Characters use foul language, smoke cigars, cigarettes, and pipes, and drink lots of liquor and champagne in a speakeasy/whorehouse called "Church."

Stage dancers appear naked from the waist up with breasts and torsos painted, feathers and thongs barely covering their bottoms; dancing is often sexualized; men slap women's bottoms (one man bites Rose's bottom); Rooster "goes down" on Rose, explicitly, from her POV; Rose moans with delight; Zora complains that Rooster cheats on her; a sex scene with naked breasts visible briefly.

Ace pulls a knife; Trumpy and his men commit several murders, with guns (bloody, explosive effects); Rose hits Rooster hard with a frying pan; Trumpy plays "Russian roulette" with his gun on a flunky; Trumpy and his men beat up Rooster, splatting blood; as a mortician, Percival treats corpses (film includes photos and long takes of bodies, some bloody, others "fixed"); a primary female character is shot and killed by accident, causing her lover to cry; a central character sets up to hang himself, and stops at the last minute.

Central dance action in a speakeasy called "Church" characters lie, kill, and cheat; woman pretends to be a well-known star.

Rooster carries a flask with an animated talking rooster that advises him; characters smoke cigarettes, cigars, and pipes regularly; Rooster collects "hooch" from bootleggers; characters drink liquor and champagne in the club, "Church."