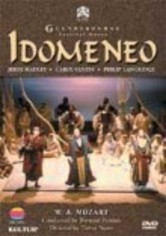 1983 NR 3h 1m DVD
Producer Jean-Pierre Ponnelle's staging of Wolfgang Amadeus Mozart's "Idomeneo," one of opera's searing classics, is sure to leave opera fans breathless. Conducted here by Bernard Haitink, this live performance captured on video includes every thrilling moment of the opera -- from the overture to the final song, "Scenda Amor and Scenda Imeneo" -- as it tells the tale of a king saved from death by the god Neptune.