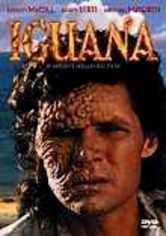 1988 NR 1h 23m DVD
Everett McGill stars as a 19th-century sailor whose bizarre facial deformity earns him the name "Iguana." Beaten and tortured by his shipmates, he escapes to a deserted island, where he declares war on all of mankind and establishes a slave empire. In a kingdom ruled by savagery and lust, can these survivors face the greatest evil of all?