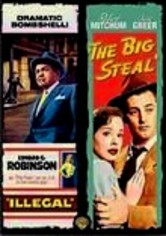 1949 NR 2h 39m DVD
Classic Hollywood stars Edward G. Robinson and Robert Mitchum headline a pair of pitch-black noir thrillers from the 1940s and '50s -- Lewis Allen's Illegal and Don Siegel's The Big Steal. In the first film, Robinson plays a retired district attorney who agrees to help a mob boss get his buddy out of a jam. Then, in The Big Steal, Mitchum sets out to clear his name in a crime he didn't commit, with help from the guilty man's girl (Jane Greer).