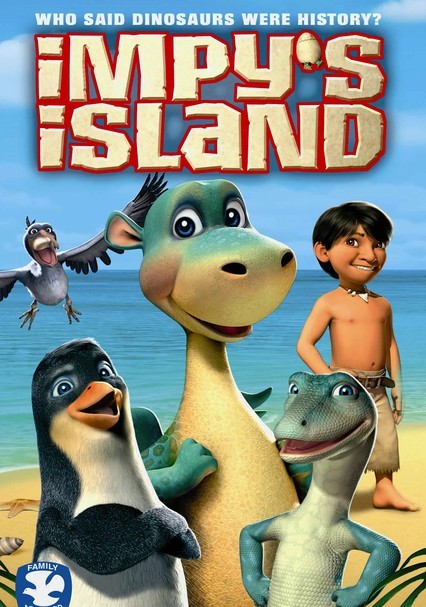 2006 G 1h 25m DVD
When an iceberg containing a frozen prehistoric egg floats ashore, the inhabitants of the island Titwoo watch in wonderment as a baby dinosaur hatches before their eyes. But problems arise when the king decides to capture the little guy as a trophy.

Parents need to know that Impy's Island is a good-natured cartoon filled with lovably quirky characters (both animal and human), music, and some light action and mild scares. The film includes an assortment of colorful, funny, and singularly eccentric creatures; they're originals and comfortable with not being perfect. The story is easy to follow and resolves with simplicity. It's mostly adorable and clever during the first half, but there are some edgier moments that may surprise or disturb very young or very sensitive kids as the story continues. A villainous king (more comic than evil, and he looks like everyone's grandpa) fires a gun at the heroes and chases them. Baby dinosaur Impy is in danger from the king as well as from his natural surroundings (a volcano eruption with burning lava on the move, a dark cave, an eerie-looking crab). Based on the famous series of children's books by German author Max Kruse, the movie is a German production with American voices for the U.S. audience.

Some mild cartoon action: bumps, falls, a food fight, a careening log ride. A vain king arrives on the island and is a danger to its inhabitants: He fires a gun, chases the animals from a helicopter, and threatens to capture Impy. Mild suspense in a climactic sequence in which characters get lost in a jungle, confront a wicked-looking crab, are trapped in a cave, and are saved in the nick of time as a volcano erupts.

Characters work together to accomplish their goals. Values positive thinking over pessimism.