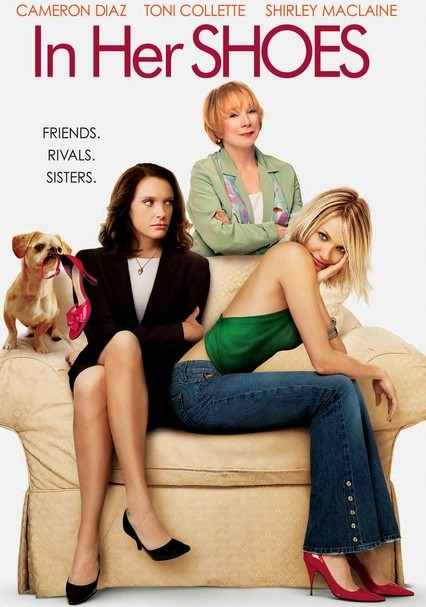 2005 PG-13 2h 10m DVD
Wild-child Maggie and straight-laced Rose have nothing in common, except for their size 8-1/2 feet. But Maggie's discovery of a long-lost grandmother the girls never knew they had could be the thing that brings them together for good.

Parents need to know that the film includes sexual references (images and language); indeed, it opens on fragmented shots of a drunken sexual encounter in a bathroom at high school reunion. Focused on the tensions between two grownup sisters, one a rowdy rebel and the other a prototypical "good girl," the movie pays particular attention to familial conflicts, secrets, and traumatic history (the sisters discuss the mother's suicide, committed when they were children; their father is remarried to a woman who treats them disdainfully). Characters use some crude language, usually in anger or surprise, including multiple uses of the s-word and hell, and slang for sex and genitals. One character reads aloud from a romance novel (including predictable, here comic, references to heaving breasts and sexual passion); and an episode of Sex and the City on TV refers to sexual activity. The rebellious sister wears skimpy clothing, including bikinis and underwear. Characters drink (to the point of vomiting) and smoke. The rebellious sister steals money and other items, sometimes from family members.

Sexual references, slang, and images (activity, cleavage, sounds), some pushing the edge of a PG-13 rating.

"Bad" girl is sexually promiscuous, steals from her family, and learns the error of her ways; snobby/mean stepmother; frequent family tensions.

Drinking (to the point of visible drunkenness and vomiting), some smoking.