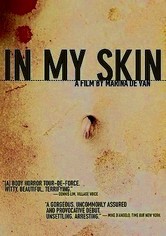 2002 UR 1h 33m DVD
When she receives deep lesions to her leg after a fall, Esther (Marina de Van) becomes obsessed with her wounds. At first, the obsession is innocent, comparable to a body-image issue, but soon she's harming herself more destructively. Esther's boyfriend (Laurent Lucas) becomes justifiably disturbed and outraged but can't understand what she's going through, which causes her to delve further into despair and her destructive pattern.