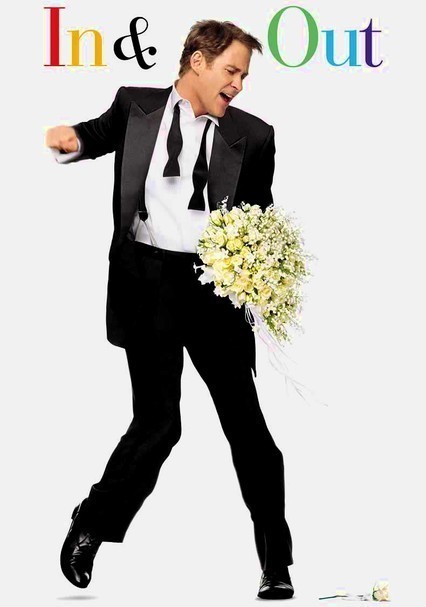 1997 PG-13 1h 32m DVD
When dim-bulb actor Cameron Drake (Matt Dillon) wins an Oscar for playing a gay Marine, he outs his high school drama teacher, Howard Brackett (Kevin Kline), in his acceptance speech. It all comes as a surprise to Howard -- not to mention to his long-suffering fiancée, Emily (Joan Cusack). With his wedding just days away and national media descending on his town, Howard's under the gun to prove just how much of a man he is.

Parents need to know that In & Out is a lightweight comedy that tackles the serious issue of sexual identity. After being publicly "outed," the main character spends the rest of the film struggling with his sexuality in a comical way, but it all has real consequences -- for him, his friends, and his family. Expect plenty of teasing and occasionally derogatory humor -- though it's mainly used in an ironic way to poke fun at the teaser, and the movie's overall tone is good-natured and well-balanced. Although the movie deals somewhat with issues related to sex (both same-sex and heterosexual), there's no nudity -- the topic is mostly covered in dialogue. Language includes a memorable use of "f--k," as well as terms like "homo" and "queer." The movie's "be true to yourself" theme also includes a small subplot about eating and weight.

Not much of an issue, but there's a mild brawl during a bachelor party.

The movie has a very strong "be true to yourself" message, no matter how difficult that may be and how many people it upsets. It also strongly promotes unconditional acceptance.

The main character gets a champagne bath in the school locker room and announces that he wants to get drunk at his bachelor party (characters also smoke cigars at the party). His fiancée and the TV reporter are seen in a bar drinking heavily to drown their troubles. A character mentions "heroin" in reference to something that's addicting.