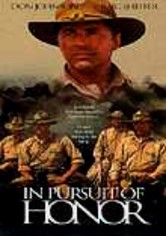 1995 PG-13 1h 49m DVD
The U.S. Calvary fought its last mounted battles in World War I, and the government's plan to retire the unit in the 1930s included the killing of hundreds of horses. Five soldiers defied Gen. Douglas MacArthur's order to carry out the mass equestrian execution; their true story serves as the basis for this made-for-cable drama. Although set on the U.S.-Canadian border, the movie was filmed in Australia.