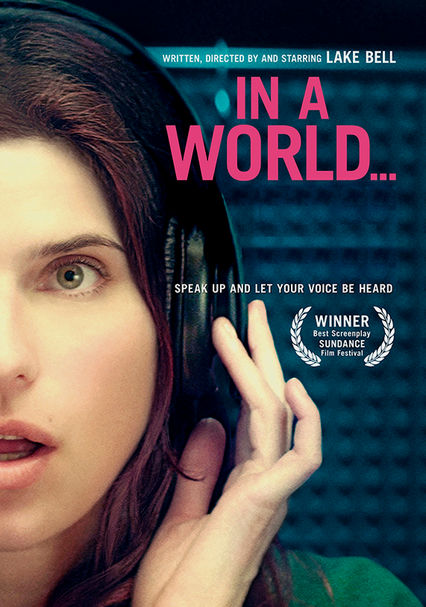 2013 R 1h 33m Blu-ray / DVD
Vocal coach Carol Solomon lives in the shadow of her father Sam, Hollywood's go-to movie trailer voice, as she tries to break into the field herself. Aided by her sister and a sound whiz friend, Carol jumps into an unexpectedly strange new career.

Parents need to know that In a World... is an indie comedy about the world of Hollywood voiceover artists. Actress Lake Bell (Over Her Dead Body, TV's Childrens Hospital) makes her feature writing and directing debut, with some empowering messages for women to go along with her witty humor. Language is perhaps the biggest issue, with fairly frequent use of strong words ("f--k," "s--t," "c--t," etc.). Though no nudity or sex is actually shown, it's strongly implied, and innuendo/sexual references are heavy. The main character sleeps with a man she meets at a party before getting together with her true romantic love interest. Adult characters drink casually, drugs are mentioned, and some products (Sunny Delight) are named. There's no violence, except for some family arguing.

Nothing sensitive is shown, but there are scenes in which there's no question that sex has occurred. The main character sleeps with a man she's just met at a party and also sleeps with her actual romantic love interest by the end of the film. Another couple has marital troubles when the wife has a meeting with a sexy man. There's strong innuendo ("putting the tip in"), and the couple has "make-up" sex at the end. Kissing is shown.

Some family arguments and a strong competitiveness between work colleagues.

A woman and her father learn to put aside the competitive, cutthroat aspects of their work and to focus on more important things. The father learns to appreciate his family, and the daughter tries to use her newfound status to empower other women.

The movie takes place in the world of voiceover artists, who often work in commercials. Sunny Delight is mentioned specifically in one scene. Other brands (Life Savers) are mentioned in asides or as jokes.

Characters drink socially or at parties throughout the movie, but no one is shown drunk. Drugs like Xanax and Valium are mentioned in passing (in reference to the character's late mother).